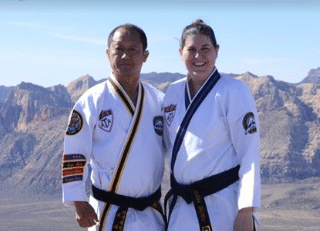 Climbing the Mountain – Year of the Master

I was actually quite nervous about the training. Probably because I had no idea of what to expect. Yes, they sent me a schedule, but I was still unsure of what to expect. I was worried that I wouldn’t know how to act or that I would make a mistake in front of all these high-ranking people and be embarrassed. I worried about this for a while, but then I decided that this was my one and only time to go through this and I didn’t want to spend it worrying, so I decided to just “go with the flow,” and be open to do whatever was asked of me. It turned out to be an enjoyable day of training and I learned a lot.

Everyone warned me that climbing the mountain would be difficult. I knew it wasn’t a climb in the sense of ropes and harnesses and such so I questioned how hard it could be if it was just a trail. Ha! It was hard. The trail was very loose like gravel and it was hard to get secure footing. It was also very steep. I found that I had to stop frequently to give my calf muscles a chance to recuperate. The way down was actually harder because of the steep incline and loose rocks. I think I mostly came down on my hands and knees and backside! And we got so lost! The trail wasn’t very well marked and I think we mistook vulture poo for the white dot markers of the trail!

But the view at the top was breath taking and it was a very surreal moment standing on top of the mountain that so many masters have climbed. Doing the traditional Songahm 1 in all 4 directions (trying not to fall off the mountain while doing Songahm 1….) and taking pictures with Grand Master and friends was an amazing experience.

Categories: Uncategorized, Year of the Master